A Message For You: Chapter 7 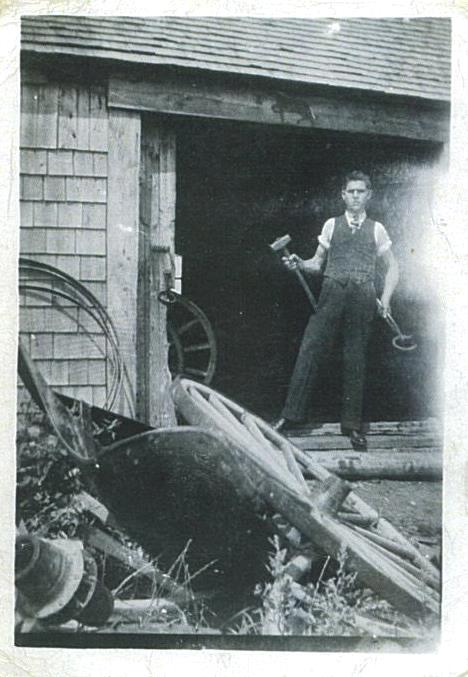 1939
My father made wagon wheels, he had to find a way to measure a wheel, in them days they didn’t have a measuring tape like we have today. I remember they had a wooden tape that was made with 12 pieces, 7 inches long that would unfold 6 feet in length. He made himself a measuring tool. He took a piece of plate 1 1/16 of an inch thick then he made an 8’’ diameter wheel, he detailed a hole in the centre of the plate so that it made a wheel. Then he took a piece of wood 1 1/2 inch diameter and 12 inch long for a handle, he took a handsaw and he cut a slot 6 inches long and he drilled a hold on the inside of the handle so he could bolt the wheel on the handle he made one mark on the wheel with a chisel for a starting point.

I thought that was pretty neat.

So when he wanted to measure the wheel or strap all he had to do is take his measuring tool and make a pencil mark on the rim of the wheel. He lined the two marks together then he would go around the wheel until he came back to where he started. Depending on the diameter of the wheel, with his measuring tool he could go 3 ½ turns then he would know how long to cut the strap. If he needed 3 1/2 turns then that’s exactly what he needed for a strap. Very simple but he had to be careful when he went around the wheel so his measuring tool wouldn’t slip. Sometimes he would have to measure twice to make sure he had the right length.

He made a lot of wagon wheels. He made them with a wooden hub, wooden spoke, and wooden rim. Then he would put steel straps around the rim so it would hold the wheel together. But in time the wood would dry out and the spokes would get loose on the hub and rim. He would take the strap off the wheel because when the wood dries out it shrinks, so he would cut the strap because it was too long then had to shorten it. Sometimes he would cut 3/4 of inch and he would weld it again, then put it back on the wheel. He had to heat it with the bark off the tree, because when you heat steel it does expand and it makes it easier to put the strap back on the wheel. We had a hole in the ground; we had water in it so we could cool off the strap. With a new strap he had to make it round so he made himself a jig. It was 5 feet off the ground then he would take the strap and put the end of it in the jig. He would push the strap down so it would bend a little bit at a time he pushed it in two or three inches at a time until it was all round. Then he would have to weld it together, but before he could weld it he had to measure it with his measuring tool again so it would be the right length to fit.

When dad would go for lunch, we would go into the blacksmith shop. We would find a couple pieces of steel and put it in the fire. We would heat it so hot that we could weld them together. We put it on the anvil and hit them so it would weld them together. We learned a lot of different things in that blacksmith shop. We used to watch dad work so we could see how to make things. We use to make axe handles for double bitted axes and single bit axes. 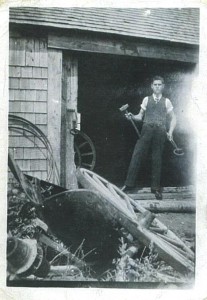 They were made different from each other. We learned to make horseshoes and how to shad the horses. I think I was very lucky to learn all the things in that little blacksmith shop. My brother Camille and I would take worn out straps three or four feet in diameter and we would roll it around the yard. We thought that was fun, sometimes one of our cousins would come to play with us. We usually had three or four straps kicking around the blacksmith shop and we would do this for hours.

Dad used to get up early in the morning and he would wake us up between 5 and 6 o’clock in the morning. It would be still dark when we had to go feed the animals, cattle and horses. We were not too old at that time around 9 or 10 years old. In the winter time it was still dark. We had to use a lantern so we could see what we were doing. When the chores were done, we could have our breakfast. We had to bring the wood in the house, enough for the day and at night we had to bring more wood in for the night. The house was very cold as it was not insulated. To keep the house warm we had to keep the fire on all night. I seen in the morning the water would be frozen in the water pail. We had a lot of snow, two or three feet of snow and a lot of wind. We would pack the snow all around the house and it would build up to 12 -15 feet high. Big storms would bring 1 1/2 feet or more at times and all winter long.
We had to walk behind the horse with snowshoes and sometimes you would do that for hours, that was three or four times a year. Everybody in the village was doing the same thing but nobody was getting paid for doing that, it was the only way to travel with horse and sleigh, and wagon in the summertime. It was the way to live, it wasn’t that easy. It was a struggle for everybody. In the spring of the year, when everybody in the village took their horse and wagon and trucks to town they would fill it with gravel to fill the holes in the road. That was the duties for everybody.

This button at the bottom of the page makes it easy to buy my book, and if you do buy one, I thank you for helping my dream come true.  If you would like an autographed copy, let me know!