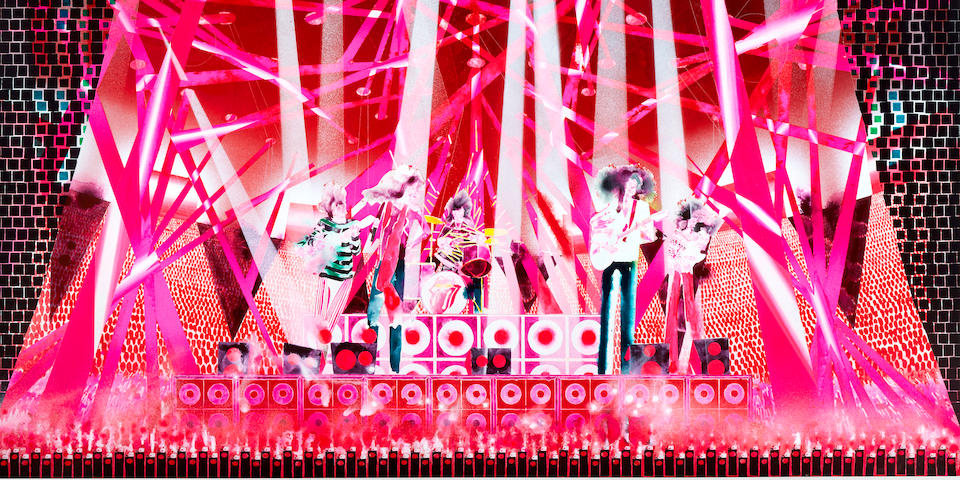 Rock Concert (The Rolling Stones), a recent painting by the American artist, Barnaby Furnas, features in Bonhams Post-War and Contemporary Art sale in London on 29 June. It is estimated at £50,000-70,000.

Furnas is known for creating work that has multi-layered meanings. This is especially true of Rock Concert (The Rolling Stones). At one level the painting is a homage to the Rolling Stones, famous and respected as the grand old men of rock. Underneath, however, the work refers to a time when rock and roll was still dangerous and the Stones, in particular, were the quintessence of counter-culture, worshiped by the young and feared by their parents.

Specifically, the image was inspired by the free concert at the Altamont Speedway outside San Francisco on December 6 1969. The murder of a fan that evening by Hells Angels is often seen as the end of rock innocence and of the summer of love which had found its apogee at Woodstock in August of that year.

Bonhams Director of Contemporary Art, Ralph Taylor said, “Furnas’ paintings are always suffused with energy, intensity, vitality; his work is a visceral response to American folklore, whether he is deconstructing images of the Civil War, immortalising stadium rock concerts or getting his hands dirty with the business of life, red in tooth and claw.

“As subject matter for an artist whose foundations rest on ideas of contrast, of brutality and elegance, form and chaos there can be nothing more fertile than a tragic rock concert headlined by the world’s biggest band at a seismic moment in Western culture. With this work, he conjures the implicitly Bacchanalian aspects of stadium rock concerts, its ritual of sex, death, violence and, of course, catharsis.”