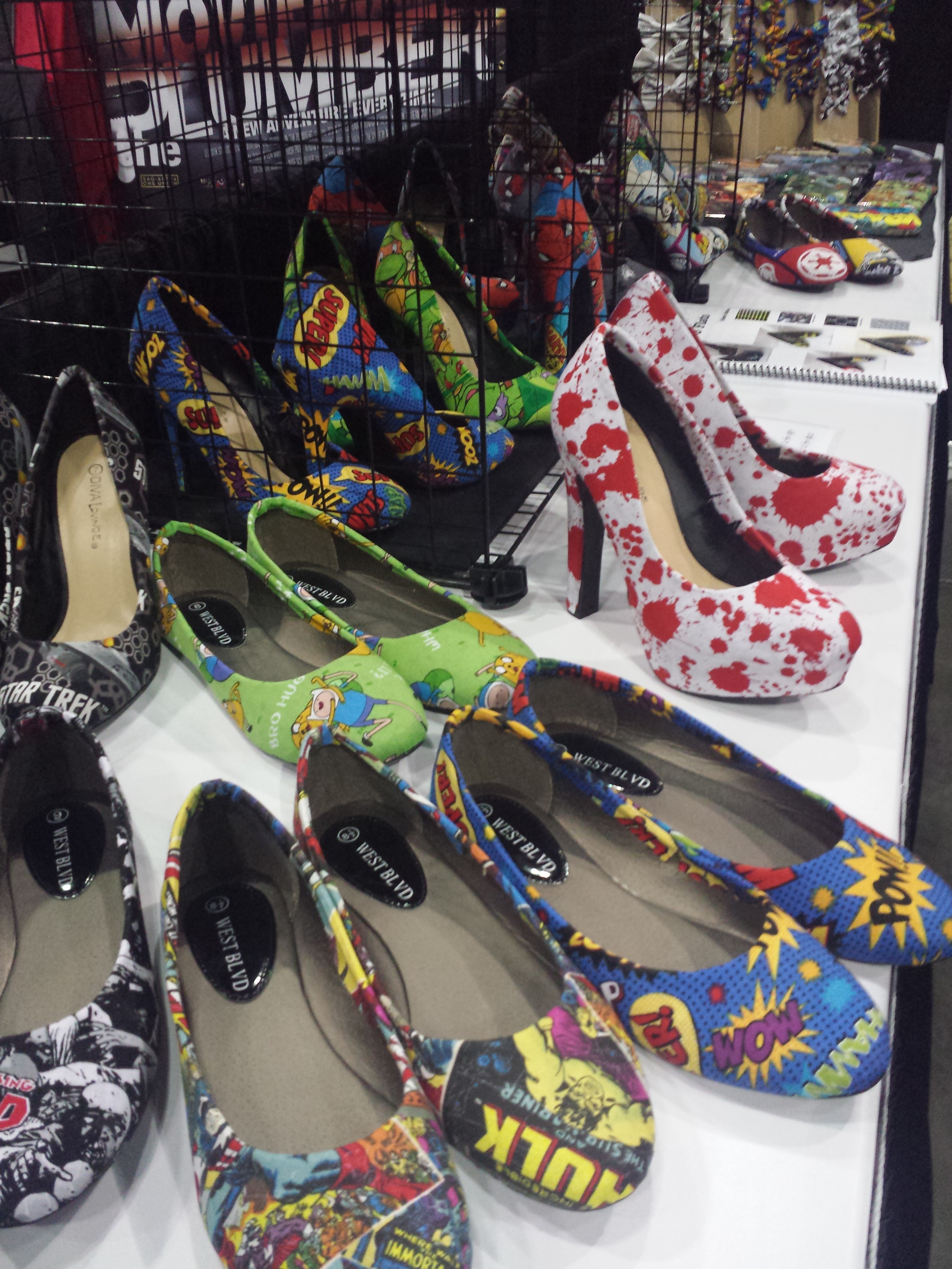 Margaret attended Comikaze 2014 in Los Angeles and stopped in her tracks when she found the EmmaLee Accessories booth and popped in to ask the vendor some questions.

Caotica: Are you Emma Lee?

EmmaLee Accessories: No, I’m Melanie. Emma is a former owner’s niece, and Lee is short for Levi, my nephew.

Caotica: So when I was walking by your booth, the first thing I saw with shoes. Comikaze’s attendees are about 36% female.  What kind of traffic are you getting here?

EmmaLee Accessories: A lot of attendees are actually coming to the booth to look at and physically touch the products, and the guys as well. So they see shoes, and they see something creative, not just heels but our flats as well.

Caotica: How do you find people end up using your shoes? I’d just dress them up and wear them for everyday as often as possible, with jeans and dresses.

EmmaLee Accessories: Jeans and dresses. I’ve seen a lot of girls wear the heels with pencil skirts for work, that’s what I get away with when I go to work, a nice outfit and then some fancy shoes.

Caotica: How do you source your products? Are you designing them yourself?

EmmaLee Accessories: All the designs are licensed fabric. I get fabric from Joannes and Fabric dot com.You can find it anywhere. I make a stencil of the shoe with a generic cheap white fabric first so I can get the pattern’s placing correct.

So, I can have Michelangelo or Donatello on the heel or a certain hero on the heel so it’ll look nice instead of just plastering it on the shoe.

Caotica: So that’s why you can do commissions, right?

Caotica: For the commissions, do people normally just ask for a different shoe size, or different fabric?

EmmaLee Accessories: Both. Obviously I can’t make every style and every size, there’s only one of me, but customers ask for a size and different placements of different heroes and princesses.

Caotica: Do you have a time of year where people are ordering lots of shoes, like prom season?

EmmaLee Accessories: The shoes are fairly new to the company. I started doing them about maybe six months ago. I have a feeling that once Christmas season hits I’m going to be swamped.

Caotica: Are the shoes just standard sizing, so if you’re a size seven normally you’re a seven here?

EmmaLee Accessories: Yes, standard sizing. I do recommend going a half size larger, because once you put the fabric on the heel, the heel will not stretch out like a normal one would.

Caotica: Right now you have heels and flats. Will you add more to the shoe line?

EmmaLee Accessories: I’ll eventually get into Converse shoes and Vans. Like with the heels and flats, I’ll make a stencil of where I want to place the fabric, cut it out, then seal it and put it on the shoe.

Caotica: What else do you have here? Even though when I walked by, I just saw the shoes. I love these shoes.

EmmaLee Accessories: I have comic book wallets and Storybook wallets. I put Disney Golden Books and put comic books directly on the wallets.

Caotica: Do you sell mostly on Etsy, or do you go to a lot of conventions?

Caotica: So for your Etsy store, do you normally just make everything and then put it up, or do you put up all the designs you CAN do and put them on order?

EmmaLee Accessories: The wallets I pretty much make and then put up. I can do custom orders so if you have a certain hero or villain or whatever you want, I can make a custom wallet that way. With the heels I try to make one in the fabric I have and then put it up, so if you want to custom order a pair in your size.

Bonhams Press Release: Influenced by Miller, the Bugatti Type 51 Grand Prix car introduced twin-overhead camshafts to Bugatti's brand of thoroughbreds. The example offered is one of the best known and most distinctive of all Grand Prix Bugattis. Bugatti Type 51...

We are baking bread for Lammas Day- Aug 1st,  the festival of the wheat harvest, the first harvest festival of the year. In the medieval agricultural year, Lammas also marked the end of the hay harvest that had begun after Midsummer. At the end of hay-making a...

BONHAMS GEARS UP FOR THE FESTIVAL OF SPEED, REVEALING MODELS FROM WORLD’S GREAT MOTORING MARQUES

Magnificent models from Ferrari, Bugatti, BMW and Jaguar are revealed as highlights of Bonhams Festival of Speed Sale, all set to go under the hammer on 24 June 2016. 'A supremely vigorous car with a fiery temperament' This is how the Ferrari 275 GTB was described...